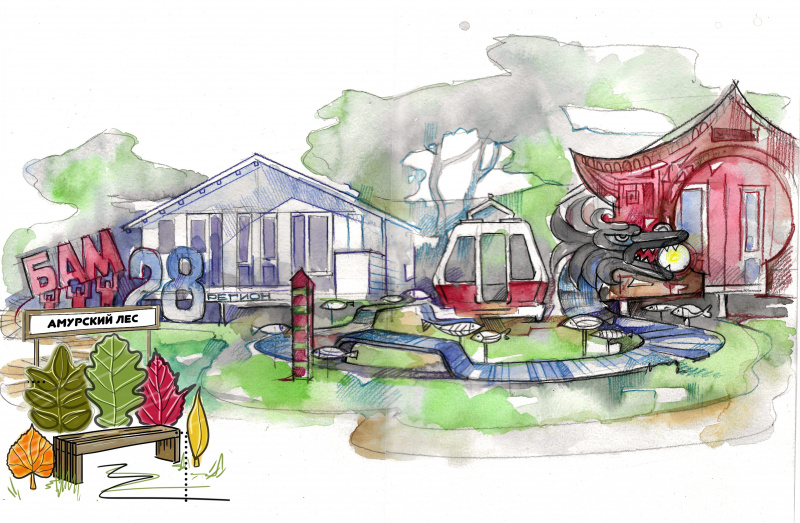 Teachers and students of Amur State University became part of the ART.RODINA project on the territory of the Tavrida art cluster. Participants from different parts of Russia worked with the cluster houses and transformed them in the style of their home regions.
The ART.RODINA project was timed to coincide with the Year of the Cultural Heritage of the Peoples of Russia. The organizers believed that the houses, decorated with an emphasis on local identity, would attract the attention of festival participants, introduce them to the regions of Russia, and also contribute to the popularization of domestic tourism.
Houses in the residential area of the art cluster tell about the region, town or interesting location using posters, maps, photographs and other elements. The teams worked simultaneously on the interior and exterior of the premises in order to “tell” the history, culture and natural features of the places as best as possible.
The team of the Amur Region included 15 enthusiastic creative people: designers from the LiS studio, representatives of the All-Russian organization "City Renovations" and Amur State University. From the university, 5 teachers worked on the project: Anna Rakhmanova, Ekaterina Levkovskaya, Natalya Vasilyeva, Oleg Korneev, Yulia Loshchilina, as well as 5 students: Anna Maltseva, Anna Kiseleva, Natalya Musagetova, Tatyana Pichugina, Anastasia Kovaleva.
The Amur team built its concept on the cross-border location of the region with the People's Republic of China. The capital of the Amur Region, the city of Blagoveshchensk, is the only regional center of Russia located on the state border. There is constant close cooperation between the Amur Region and China. In 2023, they plan to put into operation the world's first and only cable car between the two countries.
60 constituent entities of the Russian Federation participated in the project, but 39 concepts have been implemented to date. The project of the Amur team was not only among the best, but also took first place among the projects already implemented in the cluster.